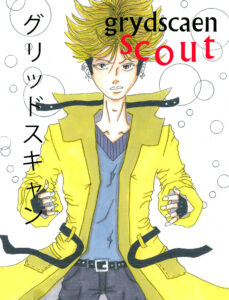 A new story birthed from the scout plot that takes place in the immersive breadth of the grydsacen world. A pandemic rages in the Echelons and homeless teens are mysteriously dying in high numbers with autopsies finding strange chemicals in their blood. When the former leader of the Packrat hackers finds data about the SenseNet, he asks the homeless teen hacker Rom to investigate.

Sneak Peak: Check out a behind the scenes look at creating a "scout" manga page. Sneak Peak: scout mini manga 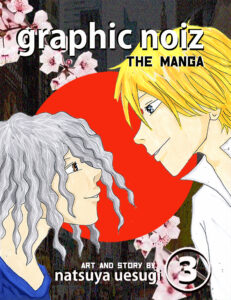 Noiz (Wolf Tadashi Begay) is anxious as he gets involved in the New York City manga artist community who teases him calling him "Gaijin." The community says he is not "Japanese enough" to be a mangaka while New Yorker's say he doesn't "act Black enough." Having grown up in Japan and on the Reservation after his parents died, his childhood trauma causes Noiz to doubt himself and his talents going on a journey of self-discovery as he navigates being an artist, coming out as gay, and being Hafu (half Japanese and half Native American). He finds he doesn't seem to fit in anywhere. Turning to Shiro Ijima, the famous Japanese SF writer who initially insults him, the aloof writer uses his own sordid past as a mangaka who was abused by his narcissistic mentor to help Noiz accept that being different does mean inferior but unique. 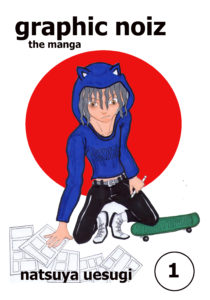 Noiz is a 19 year old manga artist just graduated from art school. Going to his first Comic Convention with his original manga Disaster Code he gets discouraged as no one stops by his table. When bestselling author Shiro Ijima stops by and sees his art, a cat and mouse game with Shiro's agent Keita starts as Shiro wants to use Noiz to illustrate a manga version of his bestselling scifi Fissure novel. Shiro flirts with Noiz and one thing leads to another in this yaoi tale. 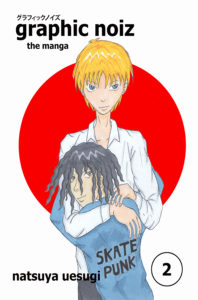 Noiz and Shiro Ijima are working on the Fissure manga and have been working diligently to get the manga created. They have been dancing around each other since the work started. Shiro is jerking Noiz around and using him for his own games. Noiz hangs on his every word trying to keep Shiro engaged. Can their relationship survive as they work on the manga. 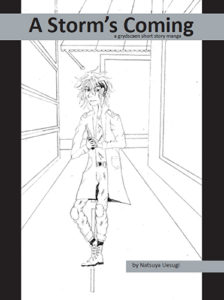 Rom is a homeless teen living on the streets. His life is full with dumpster diving, panhandling, sleeping in the subway and trying to stay alive on the harsh streets of the Echelons. Targeted by a psychic killer, Rom must rely on Zone Police officer Xander Storm to keep him alive as the killer stalks him in the Red Light District. 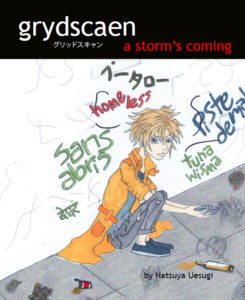 A Storm's Coming
one shot

Rom is a homeless teen living on the streets in the Red Light District.  As the sun sets curfew kicks in for the night. Can Rom survive the evening without getting caught by the Zone Police? 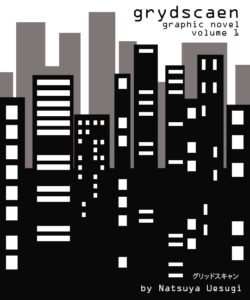 The grydscaen graphic novel features the story from grydscaen: beginnings. Fully illustrated in colour, it tells the backstory to the grydscaen series and features the hackers Faid and Acolyte of the Packrats. The first of a four volume series.