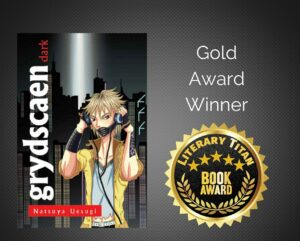 “Grydscaen: Dark by Natasuya Uesugi reads almost like a confession of part of the author’s life. Especially the detailed bits of being a hacker. Not only does this reinforce the strength in the storytelling, but it also allows readers to feel more connected with the believability of certain events. The main character, Rom, has been bouncing around Natasuya’s head since ninth grade. This is evident in the detailed character development in this story as the authors passion for these characters gives readers a character that is fully realized.
There is a lot of information to take in at the beginning of the book that might turn readers off, but the information is necessary to understand the intricate world we are placed into. A world that reminded me of William Gibson’s Neuromancer. Foremost is the rise of the coding underworld and how coding somehow became a new religion.
The writing is smooth and filled with plenty of action and conversation to keep it moving at a good pace. The main characters are fleshed out enough to make the reader empathize with them as they go through various unique and riveting situations throughout this technothriller. Rom’s backstory is especially interesting as he struggles with who he is now and who he used to be before having his memory wiped clean.
Grydscaen: Dark is a compelling cyberpunk fantasy reminiscent of the old film noir movies, but with a heavy tech and dark future elements of Total Recall or Blade Runner. The novel is relatively short, and with a world this deep and quick storytelling I really wanted there to be more room for the story. I guess that means that there are plenty more Rom adventures to come. Science fiction fans looking for an gritty hacker story with a unique and authentic protagonist will find plenty to enjoy in Natsuya Uesugi’s book.”  — Literary Titan
Pages: 233 | ASIN: B08TPSVRR3
Original Literary Titan Review Link: https://literarytitan.com/2021/03/16/grydscaen-dark/