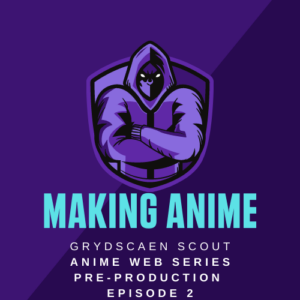 Some excellent news wanted to share. Episode 2 of the grydscaen: scout anime web series is in pre-production starting today June 3, 2021. Will be documenting the entire process from start to finish here on Patreon over the next 2 months of the project and also on the natsukoarts..com website blog that will post to my Amazon author page.

Will be sharing the entire anime prodction proces from manga adaptationn, storyboarding, working with Voice Actor talent, Art Directing, Producers,, working with the animation team, cleanup, render, script, backgrounds, music, voice overs,, post production and the season premier on Natsuya Uesugii YouTube channel. You will see everythign first up close and personal before anyone else.

You will be in on the whole process.

If you have read my BL indie graphic noiz manga all about the manga and anime creation process, about Western manga publication process,, Japanse doujin circles in Japan, book publishers, markeing and how a manga gets turned into a Japanese anime.

This Patreon Making Manga vlog series will givve you a behind the scene look at the whole anime process.

Since grydscaen anime is self funded we donn’t use Kickstarter on principal which many indie mangaka would call crazy risky. This means the anime creation proces is a huge labor intensive passion project, and I foot the whole bill out of pocket.

But the Japan market can do that because their business model is different thab DC and Marvel which relys on one floppy Distributor Diamond which killed the supply chain making comic shops have to go direc tto source, and with the Big 5 Simon and Shuster Publiher merger, that puts all manga distribution in one house which has created a paper shortage, which has led to the current manga supply shotage against the outrageous demand at the moemnt.

Anime and manga is a multi billion dollar industry in Japan and the reecnt comic industry report last week  DC and Marvels got it handed to them byy  Demon Slayer Kimetsu No Yaiba outselling the ENTIRE Western comics and graphic novel industry all players (including Dark Horse and Image in 2020 outgrossing Star Wars , Disney, and Hollywood combined blockbuster movies combines with Mugen Train theatrical release. Demon Slayer was the 2020 highest grossing manga and anime of all time surpassing the record holder for anime Studio Ghiblifor and long running One Piece manga which held the manga sales record for years. Last weeks comic sales report had the top 20 best selling graphic novels – all top 20 titles were Japanese manga with My Hero Academia holding at least 6 spots and not a single DC or Marvel tiitle anywhere near the list, not even the famous Batman property which for years and multiple properties was always in the Top 10 no questions asked as highest ranking Western comic IP – the were no where in the Top 20,. Manga kicked American comics arse! in 2020 and are slated to do it again in 2021 with current projection of sales increasing exponentially. My Hero Academia which is literally a Japanese version of the American Super Hero Model (based on X-Men mode), out super heroed Marvel and DC combined. Put Batman to fracking shame in less than a year.

Episode 2 is greenlight and will be based on chapter 3 of volume 1 of the grydscaen: scout manga skipping chapter 2 to cut cost on character design because we will use same characters frmo episode 1 featuring Rom and Fiad..

I talked to the animation team today and they are jazzed to start and episode filming begins June 15, 2021. I am so jazzed to get started.

I hope you stick around an and read along as we get this new anime episode 2 started.

Hang on, its gonna be awild ride as ou get a behind the scenes look at creating anime.