With the manga "A Storm's Coming" being used by five counseling centers to promote self esteem amongst troubled teens, we branched out into anime to provide a glimpse of the main character Rom, a homeless teen, interacting and telling the story in the manga. Used at the counseling centers to introduce the story we are greenlighted for episode 2. We look forward to providing the entire five episode short story for you in animated form. 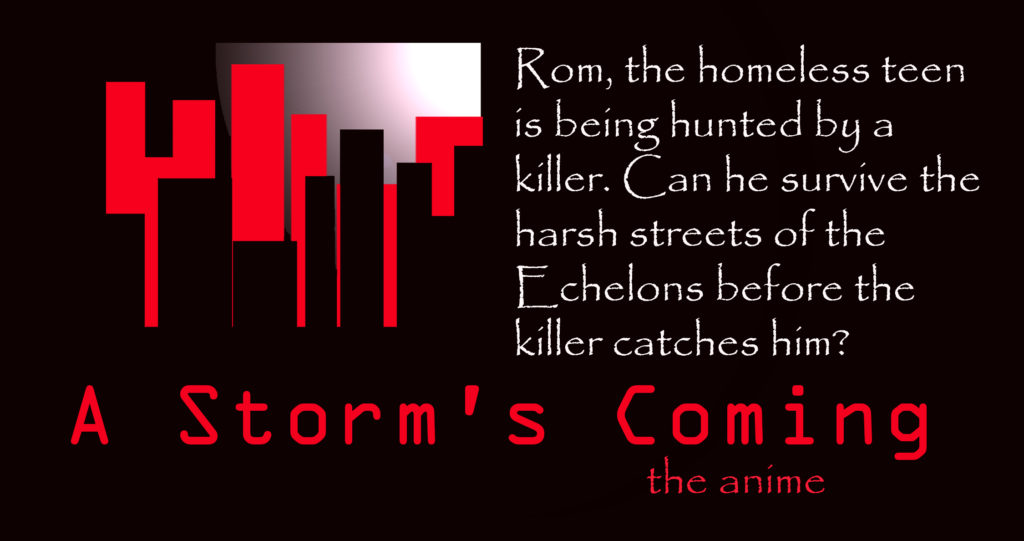 Zone Police officer, Xander Storm encounters the homeless teen hacker, Rom after the government erased his memory and threw him out on the streets. Unable to remember his name, he is known only as Rom on the streets short for "Read Only Memory" because he can't remember his past. Trailer for 1st episode in the 5-part series looking at police and homeless youth on the streets.

When Rom starts having flashbacks and gets hints of his past, the government comes after him. Fearing for his life, Rom reaches out to the blackhat hacker Jester from the Jester Hacker Guild to access the gridscan to look into his past and learn more about why the government wiped his memory and learn who is the mystery girl who is calling out to him in his dreams. First episode in the mini anime series.

Faid Callen leader of the Packrat hackers orders Rom to infiltrate the gridscan and find intel on a new anti-radiation vaccine that has been killing homeless teens mysteriously in the Echelon. Rumored that the government is involved, the Packrats are determined to hold the government accountable and reveal the truth. Adapted from "grydscaen: scout" manga based on the YA thriller "grydscaen: scout."

Homeless hacker ROM on Faid's orders infiltrates the SenseNet bio-pharma labs going on a little dumpster diving expedition to see if he can find intel on why psychic homeless teens and hackers looking into the harsh crack down on freedoms from strict Article 15 Thought Crime Laws sparking pubic book burnings on the Prophet religion followed by psychics and the uptick in Zone Police enforcement in the slum-level Echelons.

Rebel hacker Faid Callen of the Packrats illegally enters the pristine City on a mission as he zips the Newsfeed and exposes the government's strategy to control society using oppressive Article 15 Thought Crime laws that silence the truth. But Faid will not be silenced even when Kaizen the Immaculate the hired assassin sent by ZenZen comes after him.

The new episode featuring autistic savant hacker AYOR (At Your Own Risk) who is contacted by sentient AI program Omnibus Darklight to warn him as he infiltrates the Pacific Territories City Mainframe triggering a hacker online VR confrontation in the gridscan with ROM (Read Only Memory) the Packrat anti-government freedom fighters.

Hackers Unite - Faid Callen "This is Who We Are" short.

grydscasen: scout eve EP2 trailer "the truth will not be silenced"