She is a Transgender Female and little sister to famous writer, Shiro Ijima.

She is a force to reckon with.

She is Celebrity Hair Stylist

She is a Transgender Female Ballroom Performer

She is a Queen, an Artist and the Perfect Girly Girl.

But most of all She is Fierce! 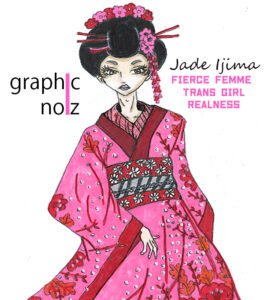 When I created the character Jade Ijima who was assigned male at birth given the name Tohru Ijima, I wanted to create my third Transgender Female Character for the manga and novellas “graphic noiz.”

Following in the footsteps of her elder sister characters that I created including Ethesian, the Gender Fluid Transgender Female magic user and seer in the epic fantasy trilogy “The Seer of Grace and Fire” and the Baby Trans Female, IIn, who is the Spiritual Leader of the cyberterrorist Packrat Hackers from the cyberpunk “grydscaen” serie, Jade is in good company.

The US Review of Books describes Ethesian as:

“Ethesian, in particular, is not all that she seems. She assumes an equally important part to the story as Timorn, the prophetic future king. She is a heroine that readers can admire for both her courage and strength since she identifies as both male and female, transcending the limitations of gender.”

Why Write Stories with Trans Women of Colour?

Because we need more powerful transgender female characters. There is so much violence against transgender people in this world, and particulary Trans Women of Colour. Strong women characters are often silenced or stereotyped, and many books about transgender people are either biographies, coming out stories, transition stories, but there are few stories that showcase transgender women or any transgender character as a strong primary heroine in science fiction, fantasy or the male-centric world of yaoi and BL.

Jade Ijima who in the graphic noiz story is mostly always seen wearing kimono to honour her mother who died when she was a teenager and who stood up to her strict Japanese father allowing her son Tohru to express his genuine self and play with dolls as a child when Tohru’s father refused to acknowledge his child assigned male at birth really was a girl. I created Jade who is a 20-something celebrity hair stylist, and ballroom performer is just straight up fierce.

We first see Jade early in the story in kimono which is her signature in the manga, we see her dressed immaculate, on point, the perfect girl and when she is first introduced in the story with she/herhers pronouns there is no question she is female, she is introduced into the story as female. It is not until well into the 2nd novella that we get the first hint she is transgender when her oldest sister, Julia Ijima insults Jade to her her younger brother, the famous SF writer Shiro Ijima. Julia as the eldest child has a certain role in her family while the Ijima children are living their lives as adults in the New York City art scene, Julia as painter and wife to a goth musician, Shiro as the famous bestsellig author and Jade as the celebrity hairstylist and fashion show makeup artist. Julia calls Jade “him” and “younger brother” to Shiro as she insults Jade invalidating her identity and femininity because she is trying to manipulate Shiro into doing something for her gallery show. Shiro imediately comes to Jade’s defense and corrects Julia’s use of she/her/hers pronouns insists that Jade is a girl unwilling to back down. Though Shiro is an alcoholic, womanizing bisexal writer who is known to sleep with his female fans for kicks and be an arrogant selfish lush, who is aloof and could care less about anyone, he is quick to always come to Jade’s defense insisting Julia respect Jade is 100% woman.

Jade is sweet, caring, a girly girl and no matter what challenges she faces, and there are scenes in particular written into the story to make a point such as being accosted by a random male when she tries to go in the women’s bathroom, to a scene where she is confronted on the street by a group of thugs one night on the street coming from a ballroom performance, to the scene where Noiz sees pictures of her dressed in cosplay as a Femme Dominatrix performance artist at a ballroom show at her air salon when she does Noiz’ hair. Even the scene where she is stranded and has to go to Shiro for money after she spends all her cash that night at Ballroom doing lines and drinking too much as she tries to talk up a guy who is interested in her these are al scenes taken from my experiences in college with my trans-feminine friends. Even Jade’s lover the gender queer fashion designer Regalia Anselario who at one time slept with Shiro who “gave Regalia to Jade” and stopped sleeping with him after Shiro found out Jade was interested in Regalia shows Jade in various situations unique to her personality and the story. In the  novellas, there are flashbacks with Jade playing with dolls as a seven year old child, of her father and the house staff at her family home in Upper Class Scarslade New York where the butler insists on calling her “Master Tohru” which she barely tolerates, and even a scene where she runs out of hormones and is depressed after missing two estrogen shots in a row and eventualy goes to the streets for her hormones and Shiro insisting she never do that telling her to come to him for the cash and never to buy off the street again. All these scenes are “real life” experiences which trans women, especially poor trans women of colour excluding the Scarsdale scene are all realistic scenes that my transgender friends have had to face.

Because there is so much stigma in the world around the LGBT and transgender community and the politics of the United States and in some countries in the world like Russia and African, Egypt, even Iran being a Transgender Woman invites violence and being queer or transgender can be considered a crime and punishable by jail, fines and even death.

More visibility is needed to transgender characters in story that are not transition stories, or coming out stories. We need more stories with female characters that have strong qualities, personalities and can be heroines that also just happen to be trans. Being trans is not “all you are” it is just a facet of your identity. Being transgender is just one of many qualities a person has and we should recognize trans characters as “whole” multi-faceted and valid, and fierce who are heroines in their own right daring to be their genuine realness and express who they truly are. Tranwomen are Queens, they are Goddessess, as Transmen are Kings. They needed to be treated as the Strong, Empowered, Super Heroes they are battling against a world that wants to deny their existence and hide them in the shadows.

Being Trans is just as valid as being Cisgender.