The following is a transcript from Author Talk with Natsuya Uesugi (Downtown Phoenix, Arizona USA – 4 November 2019)

“Cafe Ambiguity” a pop-up local writer’s group in Downtown Phoenix, Arizona that has been meeting for the last five years and features diverse authors who write fantasy, science fiction, steampunk, cyberpunk and dystopian novels that feature diverse characters representing all aspects of marginalized groups that sometimes do not get the exposure they deserve, including racially diverse, mixed, religious, gender, immigrant, LGBT and political minorities. This 30 minute talk was on the writing process and world building with our celebrity host Alice. The event was sponsored by Authors in Residence Phoenix, a group of local writers who write often, and write loud and proud bringing diversity to the local Phoenix writer’s community. Enjoy the show. 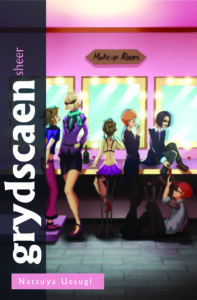 Alice: Hello everyone, welcome to Cafe Ambiguity. This evening we have the pleasure of speaking with Natsuya Uesugi, who joins us today with his book grydscaen: dark, a cyberpunk scifi techno thriller, the first in the grydscaen series. Tell us a little about your book, Natsuya?

Natsuya: Hi Alice, thanks for having me. I am happy to be here with everyone this evening.

Alice: So what is grydscaen: dark about?

Natsuya: Dark is about a 16 year old hacker named Rom, whose name means Read Only Memory. He is the son of the Prime Minister and grew up in the utopian City but the government found out he was a hacker. Because of that, Rom was captured by the Elite government and they erased his memory and threw him out on the street in the Red Light District in the slum-level Echelons with no money, no memory and just the clothes on his back leaving him with only the circuit tattoo on his forearm and a password protected handheld device.

Alice: Why would the government do that?

Natsuya: Because he was accused of hacking into Parliament and finding deep political corruption by key ministers and a conspiracy to dethrone the emperor of the Pacific Territories.

Alice: How does Rom survive the streets?

Natsuya: At times he doesn’t. He gets beat up in the story by some government operatives looking for him. But in the short time Rom is on the streets, he learns fast how to eat, dumpster dive, panhandle and survive the freezing cold and the dangers of the night. The Echelons are not a safe place at all.

Alice: Your series grydscaen was called by Rainbow Book Reviews gritty and as dark as it gets. Tell us a little about your world building for the story. How did you show the world of the Echelons and its darkness? What was your world building process like? How long did it take you to come up with the grydscaen world?

Natsuya: I first started writing grydscaen in the eighth grade, in high school. Rom was the very first character in grydscaen that was created. He was a hacker who could read binary data on punch cards and computer screens by touching the cards to his lips or touching the monitor with his hands while a machine was processing code. I even have an original drawing from eighth grade I did of him doing that. I keep it to remind me of my very first ideas for the series.

Alice: Wow from high school, that is impressive. This story must be very special to you. How did you come up with the Echelons as the name for the slums?

Natsuya: In the beginning there was always the utopian City where people wanted for nothing and everything was wonderful, pristine, and beautiful, a luxurious place to be. I needed to contrast that with a slum area that was devastated with crime and destruction, poverty and danger. I took the Red Light District, prostitution, drugs, addicts, crime and poverty and rolled it into what I called the Echelons. I picked the name originally because of stairs, where you could go up or down in society, downwardly mobile which was an idea I got into in Undergrad in college.

Alice: So is Rom downwardly mobile?

Natsuya: I would have to say so. Son of the lead minister in Parliament, wanted for nothing, good schools, fancy clothes, money, anything he wanted, but still that curiosity to find the truth was always more enticing for him and that is why he became a hacker, to find connections others did not see. He hacked into the Parliament right under his father’s nose and had been doing it for years before the government caught on that he knew more than he should.

Alice: How did you develop Rom’s personality? If he was a hacker couldn’t he hack his way into the government again steal money and restore his name? He could become anyone, right, like Social Engineering 101?

Natsuya: He could but that would go against Rom’s strict moral code. For him truth is more than wealth and safety. For him the code is divine. He would rather be homeless, starving and righteous, then rich, spoiled and empty.

Alice: I see. Got it. So from a worldbuilding sense would you say you are a pantser or a plotter? Did you write a ton of notes when you were creating the story of dark?

Natsuya: Nope. I knew Rom and his fellow characters and I went in with hair on fire, writing by the seat of my pants. The characters speak to me. They go where they want to. I just drive the car never knowing the destination. But I did have to plan the hacks that take place in the story and the conspiracies.

Alice: Speaking of conspiracies, dark has also been recognized for its brilliant suspense and layers of conspiracies. Can you tell me one of the conspiracies in the book without giving too much away?

Natsuya: Lets just say Jester, the blackhat gothic aristocrat hacker, leader of the Jester Hacker Guild, speaks in nonsense riddles that seem to mean nothing on the surface, just insane, but deep down, every single word Jester says means something. His words took planning. I had to fashion his way of speaking and use of flowery language to go along with his high fashion clothes that he could only get from the black market stolen from the City, fashion that people in the Echelons could never afford.

Alice: I see. So Jester is more than he seems?

Alice: So one of the topics at Cafe Ambiguity is diversity. Tell me about diversity in grydscaen?

Natsuya: I have people of colour, gender fluid, gay and even drug addicts in the story. And I deal with everything from mental health, suicide, sexually transmitted diseases, poverty, war and radiation sickness, big pharma and price gouging drug prices, oppression, hate crimes, homelessness, government overreach, and immigrant and religious bias.

Alice: That is a lot for one book. How did you fit it all in there?

Alice: Tell me how your background figures into the characters. Do you use pieces of your life to fill in gaps or inform the story?

Natsuya: The character Lino Dejarre, the emperor of the Pacific Territories and son of the Viceroy, as well as a clandestine psychic operative of the Psi Faction, you could say, has a little bit of me in him.

Natsuya: A lot actually but you have to read the book to find out what I am talking about.

Alice: Not going to spill the beans?

Alice: So what writing projects are you working on now and how do they fit into your social agenda?

Natsuya: My social agenda is to provide visibility to marginalized groups that don’t get space in mainstream literature. I write diverse characters because the world is a diverse place. There are more Hafu and Mixed people like myself than ever before and we need to ensure those teenagers see themselves in literature.

Alice: Is that why you wrote grydscaen?

Natsuya: I wrote grydscaen because there were no books like it in college when I needed to see diverse people in positions of power, when i needed a role model and was dealing with finding myself and my place in the world. I couldn’t find those books so I wrote them myself. The book grydscaen: utopia and the just released grydscaen: sheer about students at art school are both actually based on journals I wrote sophomore year in college.  I strung the journal entries together about real events in my life and made it part of the grydscaen series.

Alice: So grydscaen is based on a real story?

Natsuya: You want to know Lino at 17, read grydscaen: sheer. My college friends could tell you. Is the story truth or is it fiction? The reader needs to judge for themselves.

Alice: One last thing before I let you go. Where can we find you this week? This  is your US book tour, right?

Natsuya: I am in Phoenix this week for a few events. I will be focusing on outreach this week sponsored by Natsukoarts Design Studio talking about LGBT homeless youth issues and stopping by a homeless shelter with donations of socks and t-shirts. I got a whole suitcase of black socks and black t-shirts which are heavier than you would think, actually.

Alice: When is your next book coming out?

Natsuya: The next book is called grydsacen: scout and also features Rom. It is the sequel to grydscaen: dark. All proceeds for scout go to the Breast Cancer Awareness.

Alice: What an excellent cause.

Natsuya: Yeah, I wanted to do something to help in memory of my best friend.

Alice: Well, Natsuya, our time is up. Any parting shots?

Natsuya: Always be your genuine self. Don’t let anyone take that away. You can do anything you set your mind to.

Alice: Great advice. Where can we find your books?

Natsuya: On Amazon and at natsukoarts.com.

Alice: Thanks for stopping by today. Natsuya will be signing books tonight right here so come check it out in the back and get a chance to ask Natsuya some questions. I am dying to know, exactly who Lino is now. I bet you have more in common with him than you are letting on.

Natsuya: I will never tell. You have to decide for yourself.

Alice: Thanks Natsuya. It was great to meet you.

Natsuya: I had fun tonight. Looking forward to signing books.

Alice: We have copies of grydscaen: dark and grydscaen: utopia here tonight. So pick up a book for Natsuya to sign and he is giving away  game cards from the grydsacen RPG game Hack the Mainframe to everyone who buys a book and gets it signed. You got me curious. I need to go read utopia and sheer because I have to know your secrets. This is Cafe Ambiguity signing off. Write to survive!