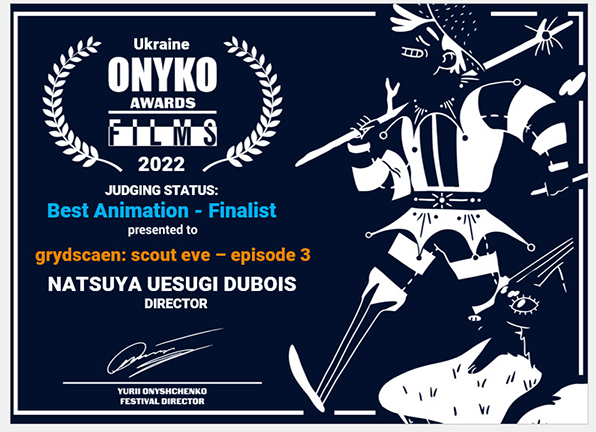 So humbled to find out that grydscaen: scout eve has won the award for “Finalist – Best Animation” from the Ukraine Onkyo Films Awards April 2022. I was honoured to be personally invited to the festival and submitted immediately during a time of challenge and strife in Ukraine during the violence and mounting refugee humanitarian crisis.

As iron blood-stained sidewalks littered with discarded remains of metal shell casings and shredded-lives shattered by war as artillery fire rains down between on streets lined with burned out windowless cars and a sky sprinkling angel’s tears, I pray for all those in Ukraine, the displaced, the asylum seekers the refugees fleeing to safer climes, and “those who remain” in a battle for dignity, rights, hope, freedom and the “relentless pursuit of the truthwhich is the hallmark and main mission of the grydscaen series using my pen to be to “voice for the voiceless.”

[W.E.B Du Bois] came to the conclusion that in a climate of virulent racism, expressed in such evils… social change could be accomplished only through agitation and protest.”  — Link: Encyclopedia Britannica W.E.B. DuBois at: https://www.britannica.com/biography/W-E-B-Du-Bois

The grydscaen series speaks about hope, equality, honour and the fight for truth and an to senseless violence, corruption, and oppression as the Packrat Freedom Fighters raise the Resistance with Packrat “Saicho” Opposition Leader Faid Callen starts an all out Hacker Revolution waging guerrilla warfare in the streets spurred on by mysterious gothic aristocrat misanthrope Jester Remy Samael Black Hat Hacker Leader of the Notofious Jester Hacker Guild (JHG) who started a hacker religion worshipping AI sentient-program Gaming Avatar Omnibus Darklight. Jester, a Sage of Maths prophesizes the omniscience of binary code hidden in sacred geometry sicking his hackers o an enterprise-wide global wav e of destruction in the corporate techno p;layground of the “gridscan,” a ubiquitous matrix of information technology, networks, satellites, switches and technical infrastructure as they devastate the Zone Police and Elite Military strangle hold on command and control on the ground giving widow to Faid’s Packrat Waste Freedom Fighters and beloved Faction System led by Dark’s mercenary mobile frame forces, Keter’s Strategic Intel Forward Base and the critical information pipeline supplied by Ang leader of the Packrat processing Center and his nimble fleet of Packrat Runners risking their very lives in open combat zones as they smuggle secret cyphers the critical encrypted messageing network able to expose Elite battle plans that Acolyte and his eer present squad of techno-warriors along with Jazz running his tight-knit rag-tag cyber family of jet jockey orphans and street kids navigating the gridscan jacked in from The Soul Deep diving the gridscan inline along with Velvet Hours kamikaze molotov-cocktail street kids and Hacker Stair’s “avatars in binary” lead by the elusive Software Engineer Mage of the Terror Hack supported by Seraph’s biker gangs and Clannet’s Yakuza muscle kids. But it was the rallying cry of the Hacker Revolution that was taken up by 16-year-old Homeless Hacker ROM whose name means “Read Only Memory” after the Elite government wiped his memory and experimented on him who became “The Voice of The Resistance” through his his underground subversive radio show “Packrat Underground” who at broadcast depth is the “Radio Free Europe” of the Echelons as the air raid sirens go off the threat of high radiation in the air under the constant undercurrent of gunfire under the fog of devastation, of a senseless war…

I am honoured to support Onkyo and have grydscaen: scout eve at the festival NFT trophy.

Thanks for such a wonderful opportunity.

All praise goes to God, I am just a relentless humble warrior.
A simple writer who can draw…

Do you see the sky brighter?

Pray for World Peace and a swift end to war.