Shoji here. Wanted to kickoff with a post on diversity. Today we will be talking about the character Jazz from Natsuya Uesugi’s grydscaen: dark novel that was just released. Jazz gets a big part also in the online web series grydscaen: darkness available on the grydscaen blog. I think you will like what we got today because we are all about Blasian. Stick around and read on for showcasing Black characters in science fiction. 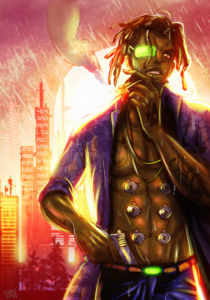 Jazz is a Level 9 hacker and jet jockey with one of the best trailing rigs in this business. He runs The Soul Deep jet jockey underground and the Jazz hacker guild in the Echelons near the Red Light District. Jazz is no nonsense, straight edge, techno fetishist and serious when it comes to hacking and taking care of his jocks. His teams attack the Corporation and the SenseNet.

Diversity in Science Fiction and Fantasy

There has been some controversy over the last few months about diversity and cover art in the science fiction, contemporary and romance genres. Many self published authors are learning that when they put People of Colour on their covers that sales are less and their books do not get as much visibility. Much of the genre in science fiction and fantasy has seen lack of People of Colour portrayed in stories, this also affects comic books. There has been a resurgence of black artists and characters with the movie Black Panther which was received well in theaters and it gave audiences a glimpse into a more diverse world.

But even though this is true, Black characters and even more Blasian characters (Asian and Black) are scarce in literature it seems. Natsuya Uesugi wanted to make sure that there were People of Colour represented in his grydscaen series. The concept art of Jazz is true to that vision.

Writing a Black Character in Jazz

A turn of phrase, a certain action, how the character talks, their backstory, all this filters into how a reader sees a character. Natsuya provided the artist with an episode of the web series grydscaen: darkness to give some background on Jazz and the concept artist was able to see the cultural influences portrayed in the writing and dialogue and capture the pure essence of the African American and Polynesian character Jazz which relays in the picture.

Cultural influences like music, environment, affect and way of speaking all have to be taken into consideration when writing diverse characters. Being Blasian myself, I can relate to Jazz a little more than maybe another character in the story. We also see Jazz playing both sides, a cyberterrorist and an informant to the government which puts him in a unique position.

Natsuya was able to play Jazz off characters like Jester and Faid who are Caucasian and show how their interactions are different and are influenced by the cultural differences between the characters and where they come from both emotionally and culturally.

Jazz is hard edge and has a deeply mindful way about him, even if he is a little hip hop and techno fetishist. This brings him down to earth and gives him an edgy feel that plays well against Jester’s insane gothic eccentricity and privileged view bringing the Jester character back to reality. Jazz is no nonsense also which makes him real and easy to relate to.

Black Characters and How to Promote Visibility

With the diversity of the world now and people having more access to travel, there are more opportunities for people to witness other cultures. With the influx of immigrants and migration across borders, we are seeing more diversity. The make up specifically of the United States is more diverse than it has been in years. But the United States currently has an issue with marginalization of People of Colour and demonization of Blacks, Asians, Latinos and immigrants including Muslims which we are seeing recently and the backlash of empowering of anti-black movements in the country. With these factors in the environment that are causing more marginalization of Blacks, we need to ensure that writers and comic book artists are making sure to showcase diversity in their works. Natsuya I know wanted to make sure minorities were represented in his works and Jazz is just one way of making that happen.

Encourage writers to write People of Colour in their works and also to expand reading to include Black and immigrant as well as Asian stories. This is important so that we have a rounded diverse view of our world today and are not “white washing” literature, we need to relate the real world not some stereotype that doesn’t exist.