I wanted to start the Making Manga series on the natsukoarts blog and take about adapting a story from a novel into a manga. Since the graphic noiz novellas are already written, at least 5 of the 6 in the series, it is easy to take the written book and start an adaptation because I am already aware of the story line. I did not want the manga to directly copy the story all the time, so with book 2 of the manga we had some unique scenes that were not in the novellas. For manga volume 3, the manga will have its own unique story that is not in the novellas to bring a whole new experience to the reader, so I wanted to talk a little bit about that decision and share some art with you from the graphic noiz manga 3 which is currently in production.

Making a manga is about being able to tell a story visually that may not be portrayed in writing. The drawings need to encompass emotion and really tell a story without the words. I use the image below as an example of a scene between Noiz and Shiro that evokes a feeling without even knowing where it appears in the story or what the dialogue around the image is or the narration. What do you see when you look at the image below? Is it sweet? Is it sad? What emotions does this evoke? 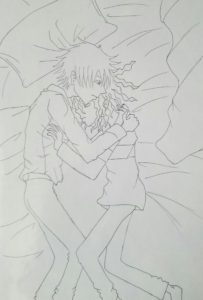 Evolution of the Story

graphic noiz is in and of itself a tale about the relationship between the famous writer Shiro Ijima and the unknown amateur artist Noiz. It is as a story about making manga as it is exploring the relationship between the two men in the series and how they deal with one another, their ups and downs, their feelings and the work that they are doing to create the Fissure manga from Shiro’s story by the same name. The books explore their emotions in depth and really touch upon the heartfelt feelings the two have for each other even when they are screaming at each other or fighting.

With graphic noiz manga 3 since we had explored Shiro’s emotions so much in graphic noiz manga 2, I want to focus on Noiz more and the cultural aspects that he faces being a Hafu, half Japanese and half Black and Native American. This is a YA yaoi story so the manga is not overtly sexual and looks at Noiz’ emotions and how he deals with feeling outside of the cultures he belongs to.

When I went in to write the story for manga volume 3, I set out to focus on Noiz’ emotions and his heart and to look more into how he interacts with the world. So just as much as Noiz is learning who he is in the story, I am letting the writing and the dialogue evolve as I draw. Normally a manga artist follows a script and draws panels based on a storyboard or outline. I did that for manga volume 2 and not for volume 1 thought volume 1 followed book 1 and book 2 very closely. I found that doing that was limiting on my drawing, so for volume 3 I am playing total pantser and going where the writing and the illustrations take me, which is very liberating.

With so much going on in today’s society and the cultural sensitivity that people are seeming to miss and the cultural biases and the hatred that is spewing these days, I wanted to focus on Noiz as a minority and explore how he sees the world and what that means to him, racism, bigotry, labeling, bullying, all these aspects will be part of graphic noiz manga 3 so that I can explore and make commentary about today’s society and intolerance and how that needs to stop and people need to be more open to diversity. This is the message that I want to send with graphic noiz manga 3 and how Noiz deals with adversity and comes to find himself and grow in his art and self confidence as a young gay man of colour. It was important to me to enable youth to see themselves in literature and art and I wanted to do that with graphic noiz.