Shoji here. We have a great guest post from Natsuya Uesugi today talking about his manga project “graphic noiz” which Natsuya wrote and illustrated. Natsuya wanted to stop by and talk about character design and showcase the new look for his character Shiro Ijima, the bestselling writer of the Fissure scifi series who is one of the main characters in graphic noiz. Welcome Natsuya.

Today I want to show off my new design for Shiro Ijima and talk a little bit about character design for manga. I am in the process of getting ready to start work on the manga graphic noiz 3 and illustrating the story. The work is planned to be 100 pages and be loosely based on graphic noiz 4 and graphic noiz 5. The project is ambitious and I want to step it up a notch from volume 2 so this will definitely put me through the paces and take all may concentration and time. But lets talk about character design and I will show off my new design for Shiro Ijima the writer in the graphic noiz story. 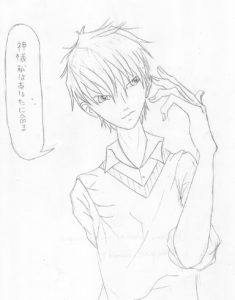 Developing Characters: So when you originally start creating characters for your story you have to be aware of their personality, likes and dislikes and how they act and speak. I find that for graphic noiz I created the novels first so the characters were flushed out in that process already so when it came to design it was just a matter of getting that fully formed character and give him a specific look. I usually write up character sheets with traits, expressions and likes and dislikes about the character. In the case of Shiro he has gone through a few redesigns and the above is his latest manifestation. Even though I am happy with Shiro on paper in written form, I was not fully happy with how he looked when I drew him in volume 1 and volume 2 of the manga so he needed a change.

Once I had his personality down, I worked on his dialogue and how Shiro speaks. Since Japanese is Shiro’s first language he does speak English fluently so sometimes Shiro has some awkward English statements that are based on that distinction. His words are also sprinkled with Japanese words sometimes.

What goes into developing a character?

Designing Characters: The first change was Shiro’s hair. I knew what I wanted for his hair but I needed to get the final design down. I finally have that this week and will be working on using that hair style for all future images of him.

In addition to Shiro’s hair, I have updated his face and eyes. I have been working on new eye design for a while and have come up with something a little different since volume 2 of graphic noiz. Now that his eyes are finalized we can move on to his features. He is Japanese and so he needs to look less American or Western and a little bit more refined and gentle, even “pretty.” So this new design has this aesthetic and has his face a little longer and thinner and his eyes and mouth really thin.

Still working on Shiro’s clothes. I need more work in the drawing fabric and clothing department so that I will need to work on. Shiro wears high end clothes and button front shirts and blazers most of the time so I will need to look more at references and design a jacket for him. In the image above I put him in a button front shirt and a sweater vest so we will work on clothing next.

I am working on a series of turnarounds for Shiro and facial expressions to create a character sheet. This is being worked and will be done in the next few days. Once that is done I will have a sheet to use for Shiro that can be used as a reference. Now that I am happy with him I can work on trying to maintain consistency with his characteristics.

The character sheet will include a character turnaround with different clothing and facial expressions in different poses.

What goes into designing characters?

Maintaining Consistency: Since I had such a trouble with getting Shiro consistent, more so than Noiz the other main character, I will be doing a special practice with Shiro to work on it more. This practice will include drawing Shiro over and over again every single day and working on getting him in different positions and poses and trying draw him multiple times will be done. So I will be practicing drawing Shiro so that I can see if I can get it second nature to see if I can make him consistent. It may be a little easier to have Noiz consistent because his hair is so different and his look is a little easier to draw.

Shiro is more generic with his hair but he is a unique character so he can be individualized and we can know who he is. Since Shiro is the only character with that hair and look, demeanor and presence, we are able to determine it is him in the previous volumes even when his design chnaged.

What goes into maintaining consistency:

Drawing the Manga: Once I am done with the consistency practice with Shiro and can get the design down and repeatable then I will look into drawing the manga again in 2019 for volume 3. Right now that is a little ways off because I need to work on finishing the script. Once the characters are consistent then we can work on the story and illustrating and blocking the pages.

With the method of drawing and the story stepping up for volume 3 there will be more backgrounds and also more details on the characters. Clothing will be important and environment. I will also be looking on working on shading and screen tone so that we can work with it and get it done.

So thanks Shoji for letting me stop by share Shiro and talk a little about designing characters. I had a blast.