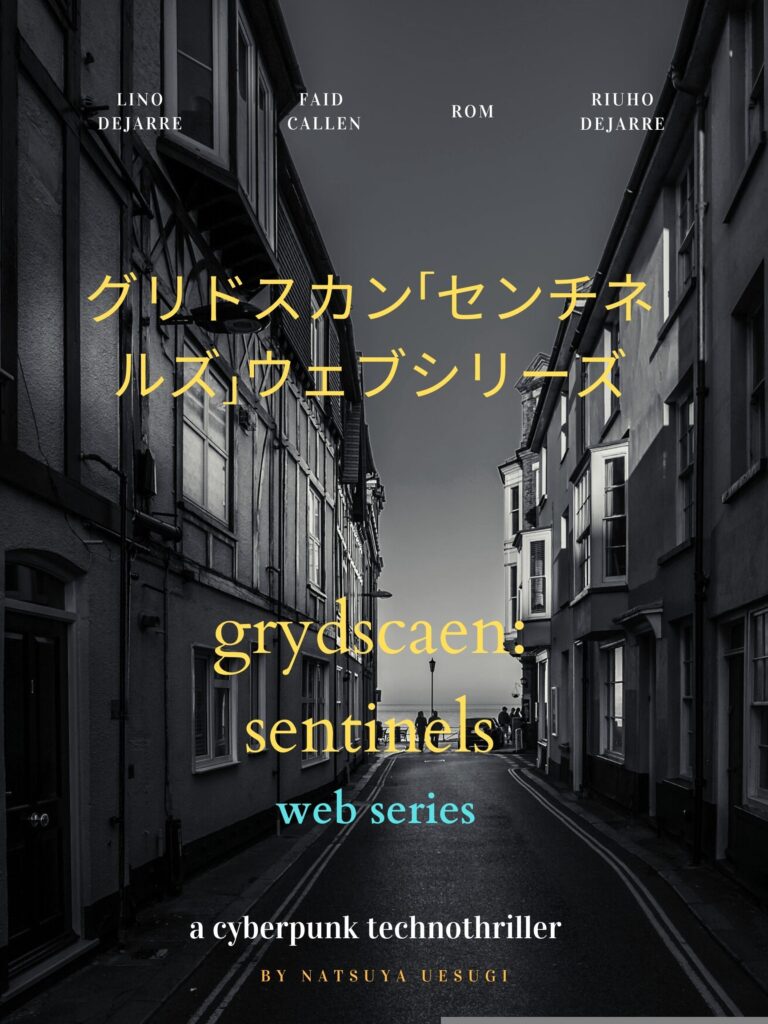 Rafe fed the seventeen year old Nier another sim chip as he stuck out his tongue, eyelids fluttering, his cyberwire activated. He leaned on his elbows in his black lace underwear no shirt on lounging on the bed licking a red lollipop. He was spent after a night of hot sex with Rafe, leader of terrorist group Velvet Hour.
Rafe pulled on his white suit jacket watching Nier suck on the lollipop, emotions raging, emotions heighened as Rafe took in every contour of Nier’s body, molesting him with his eyes.
“Fun’s over, Nier. Time to work…”
Nier swung his feet turning over on his back sitting up putting a hand on his crotch touching himself. “Come on, one more minute, I like to watch.”
“No, now!” Rafe slapped Nier on the back of the head yanking him out of the chair, impatient.
“Fine…” Nier climbed off the bed licking the lollipop then stuck the candy in his mouth pulling on pink tech-fabric pants and a torn shirt with blue and white graphitti with the name Omnibus Darklight on the front.
Rafe slapped Nier on the back of his head. “Get on with it…”
Nier got the hint moving to the the NEK hardline terminal of the desk at the corer of the room, two monitors plugged in popping onto the stool looking over the hardware. Not Rafe’s, no his, some piece of trash rented by the hour from the manager of the Love Hotel, the rooms for sex not known for their technology.
Nier popped onto the stool as Rafe handed his a silver credit card which he shoved in the slot hard then logged in, public.
“This shit arse terminal masked?”
Rafe pulled a data card out of his jacket pocket from the Hack nightclub prize desk which would encrypted and m any terminal as long as it had enough memory to accept the ware download.
Rafe whacked Nier again. “Get out of my mind, Brat. I warn you…”
The terminal chimed as the encrypted session started, Nier handing the lollipop to Rafe. “Sorry. What target?”
“We wait for Isk to contact us, soon.”
Rafe smacked Nier on the shoulder walking out of the room.
“Hey, my fee…”
Rafe hit the door chuckling. “Host wants payment for sex?”
“You fucked my arse, pay up, Arsehole.”
“You neutralize Isk’s target then you get aid…”
Waving a black data card, Nier tried to take the card as Rafe pulled the card back. “Screw me again, I cut you off…”
“Fine…” Nier took the credit card stashing it in his pocket.
The computer terminal beeping, Nier grabbed a handful of sim chips from the dish on the desk that Rafe had left for his special as part of his payment. Chewing heartily, Rafe remarked pacing at the backk of the room.
A pop-up message flashed on screen, Nier remarking. “Message from Isk.”
Rafe responded leaning over Nier’s shoulder.
Nier read the message as he popped a more sim chips. “Says to attack Vena with coordinates. Some type of trigger sequence ini some app to download. What’s Vena?”
Rafe rubbed his temple perplexed. “Not sure. Just trigger the sequence. Just do. Don’t pay you to think or talk.”
Nier entered the sequence. “Triggering now.”
Moments later a sequence confirmation displayed.  “Done.”
Rafe slapped Nier on the back of the head throwing a wad of paper credit bills on the keyboard. “As always, thanks for you service.”
“Understood,” Nier snatched up the wad of cash counting it as Rafe exited leaving him alone in the room. Grabbing up his handbag, he stashed the cash shutting down the computer which wiped the cache and all data then bounded down the stairs skipping through the scummy Love Hotel lobby playfully saluting the hotel manager behind the desk.
Exiting the building, he slipped stealth among the crowded streets in the Echelons Red Light District drifting underground, lost in the chaos of the slums.

The City – Viceroy’s Palace | Office of the Lead Minister

Phone ringing off the hook, Mr Stuart, Lead Minister of Parliament ignored the non-stop chimes as he sat in his office in the dark contemplating his next move. He knew the call was from the City mainframe administrators reacting to seeing the anomaly in the system logs for the security alert system that flagged his access the minute he logged into the Vena system.
The Vena military satellite stored Top Secret classified data on the Pacific Territories Royal Houses plus metadata on every citizen, non-citizen and visitor residing within the City, slum-level Echelons and the Zone devastated by the nuclear attack by the Atlantea Federation.
Data flashing on the screen, the streaming data twinkled off the wine glass, its vintage merlot he had saved for years to celebrate the day he was sworn in as the head of the Pacific Territories’ Parliament. The NEK hardline terminal chimed as the decrypted data downloaded. Opening the logs of his scanning activity over the last twelve hours, he confirmed Vena had been hacked as he pulled the pin drive out of the terminal waving it.
Silent, the well-known data messenger wearing a blue military pea coat stepped out of shadow from the far edge of the room, his face hidden by a SenseNet anti-radiation mask, his hood hiding his face. Leaning over the desk facing Mr. Stuart, he realized he was dealing with a traditional data messenger who followed the old school protocols.
Accepting the data with the right hand following the old ways, the hand symbolizing the great god of wisdom god Thoth. The little gesture reassured him the data messenger’s integrity, trustworthy. Accompanied with the exorbitant fee to hire him for the job at hand, he relaxed growing more comfortable that he had made the right decision.
Mr. Stuart dropped the pin drive in the data messenger’s hand hesitating for a second relaying orders after ensuring the white noise filter and the psi block was on so no one could snoop on their current activities. The sensitivity of the data dealing with this level of Top Secret data some could see as treason against the Empire.
Clearing his throat, Mr. Stuart inquired, “Back channels only. Off grid. Updates me every hour. This handheld has my number on a  secure channel. No trace back. This data…”
Interrupting the data messenger shook his head. “Don’t reveal anything about the data. I don’t need to know. Protects you. Protects me. Its your insurance. You paid for that protection.”
Mr. Stuart nodded continuing the instructions. “Final payment on delivery. When the mission is done, destroy the handheld.”
The data messenger walking towards the door. “Understood.”
Mr. Stuart cleared his throat again, the messenger turning back. “No leaks. Pacific Territories securities takes precedence….”
Tapping a fist to his, head bowed. “All hail the Packrat code. I guard this data with life. I am sworn by duty as a Packrat, as a data messenger.…”
Mr. Stuart raised an eyebrow. “If you fail…”
“The data is important not the messenger. If I fail, my life is yours. We have a contract. I’ll deliver your data. My word, my bond.”
“Remember that.…”
Meeting Mr. Stuart eyes, the data messenger bowed. “We are Sentinels. This is who we are.”  He slowly phased out teleporting away, the words lingering in Mr. Stuart’s ears. Satisfied, Mr. Stuart picked up the remote waving his hand over the lamp, the desk light turning on with the monitors which came to lief on the wall opposite his desk. The nightly military briefing from the Pacific Territories ‘War Council broadcast on a secure channel.
Turning up the sound, Commander Ima from the Esset Battle Fleet was on screen speaking. “Ten minutes ago, we received a Level 5 incident at Lagrange 3 near the Juniper colony.”
Bolting from his chair, Mr Stuart’s back going rigid, his hands shaking. He turned up the volume ensuring he didn’t miss the report.
Commander Ima’s eyes narrowed, voice recounting the incident.
“Vena was attacked.”
Mr. Stuart’s dropped the remote control on the floor, his heart sinking as he fell back in his chair, colour draining from his face. His greatest fears realized, a nightmare come true, his thoughts raced running through the seriousness of the situation.
The bloodline…
Grabbing his red minister’s coat off the back of the chair, he raced out of his office down the hall to the mainframe administrators taking the hidden corridor under the palace to the basement.
There was no time.
TO BE CONTINUED