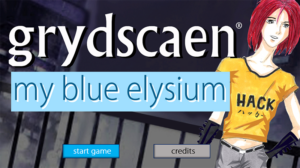 I wanted to give an update on development for grydscaen: my blue elysium visual novel mobile game for this month and talk about some of the design decisions and changes as well as plans for the rest of 2021 for the game and its design and publication.

So there were a few changes in the design of the game that were made over October. Ii can’t believe that the idea for the game started on about October 5th 2021 and we have actually finished Chapter 1 – Part 1 already and are planning to tie the release of the full Chapter 1 – Part 1 through Part 3 to the release of grydscaen: revolution which is now in copy edits and about to be endorsed to the publisher for galley creation and book formatting. This is so exciting. From a spark of an idea at midnight on October 5th to a place where we actually have a live product to showcase and share on here.

So lets talk about updates.

We are done with Chapter 1 Part 1 and all the lead player characters and support character designs are completed. We created all new assets for the 2 player and 2 support characters which I am so proud of especially the new Iin (Jiin) illustrations. I really love how Iin came out. She looks great with her long blue hair,

We also finished defining the Incident Incident which is portrayed in Chapter 1 Part 1 which is really nice. We made development more complex by having two player characters in the game with different merging storylines making for more work but I think it makes the story more robust.

So the changes. We have a few new locations, new splash screen with more buttons and new chapter menu. Let me show you the finals for the Beta version. 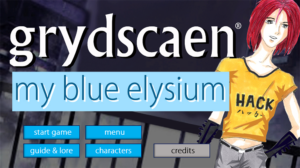 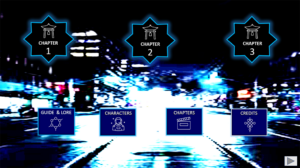 In getting further into design of Chapter 1 Part 1 we decided the menus needed to be more robust to handle the game’s intricacies and many layers so we made a design change adding buttons and finalizing the colour scheme. The main menu colours which are neon green  will most likely change to the “elysium” blue hue for branding match. 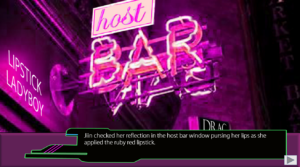 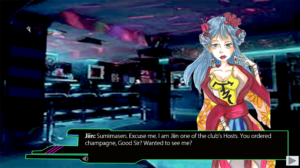 Starting on the Jiin storyline and done with Chapter 1 Part 1 for her we needed two new locations for the storyline. Though both Faid and Jiin start Chapter 1 in the Red Light District in the slum-level Echelons they are at different locations initially. Faid at a Love Hotel and Jiin at the Lipstick LadyBoy Host Club which needed graphics which you see above. We started out the Host Bar as pink to highlight Jiin as “inviting” and “girly” to fit her personality and character profile as a trans girl entertainer which was important. I wanted to have Jiin “represent” and show her creative side as not many stories that are not romance or transition/coming out stories have a strong trans female lead on an action-adventure sci-fi role. That was important to have a strong female player character in the game to compliment the player character Faid and make her just as “powerful” as he is.

We will be adding Jester the Blackhat Hacker leader of the Jester Hacker Guild from grydscaen: dark to the game who will be in both Jiin and Faid’s storylines.

Initially starting out Jester the eccentric gothic aristocrat Blackhat Hacker was not in the story. I added him over the last 24 hours as I started working on designing Jiin’s storyline for Chapter 1 Part 1. He just became necessary looking at the first chapter of grydscaen: dark and added him which makes for a nice jolt and element of chaos to the story because Jester is so very unpredictable even schizophrenic in his personality as seen in grydscaen: dark.

I want to animate Faid and Jiin so that is what will be working on for rest of October.

The map is going to be a challenge as we have the Shinkansen Metro Subway map from grydscaen: beginnings and grydscaen: inception we can use but it may need to be redrawn in a map generator for the game since it is a bit too “simple” for the game. We will need all the locations but the map should most likely be redesigned for the game. 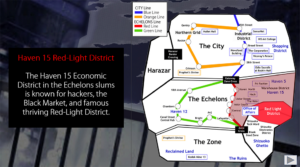 I have on more scene to finish the level in Chapter 1 Part 1 for Faid and then we are on to working on animated sprites of Faid and Jiin for some of the scenes and recording more voice overs for Faid, Jiin, Jester and Wraith. I just decided to add voice over at the last minute this morning based on some research. Then we need to find resources for free sound effects and background music.

Next Steps for November and 2021 NaNoWriMo Novel Writing Contest

Wow that was some update!

Thanks for checking up out and your support as we continue the project.