I am so excited to share the cover of grydscaen: union with you which will be published in early March. union is volume 8 in the grydscaen series and covers the Psi Faction team’s tour at the La Paz space station with the 8th space fleet of the Pacific Territories. 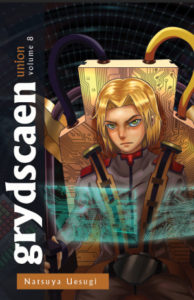 The grydscaen: union cover features Nathaneal Barjan, the pilot, in the cockpit of his Quadrion Isshin mobile frame as he joins the Pacific Territories 8th space fleet. Nathaneal is a warrant officer with the Psi Faction and is mate paired to the pilot Sati Ima who is featured on the cover of grydscaen: insurrection.

Why a Space Opera?

grydscaen: union is a space opera and takes place on the La Paz space station. When I wrote the volume I wanted to ensure that we could have space stations, battleships, space battles and show the colonies of the Pacific Territories.

I wanted to write a story in space to show the depth and scope of the grydscaen world. We were able to explore the battleship Escalon in grydscaen: insurrection but there was more to show with the mobile frames. In grydscaen: tribute we hinted at the space colonies in the short story with Titch the mobile frame technician in the short story “Juniper Colony.” This hinted at space as a possible story line early in the series. The space opera arc starts in grydscaen: union volume 8 and carries into the climax of the arc in grydscaen: honour which is volume 9.

About grydscaen: union and the cover

We looked at the Juniper colony in tribute and we expore the La Paz military space station in union. Nathaneal Barjan shines as the new leader of the Psi Faction team on their tour of space. Nathaneal had been a minor character accompanying Sati but Nathaneal gets to shine and show his prowess in union. I wanted to feature Nathaneal because the story centers around him. He has always been a helper character but he really shines in union and deserved the cover recognition.

How are grydscaen cover images chosen?

With union the design was military inspired and with high technology. The colours brown and green in camouflague were highlighted to give the right feel and the background on the front cover was enhanced to give a simulated high tech feel.

The drawing of Nathaneal seated in the cockpit was designed by Natsuya and the colours determined as well as embellishments to give the right atmosphere for the story. Union is gritty and that needed to be felt in the cover image.

For each of the grydscaen covers Natsuya thinks about who is the main character of the story. This determines who graces the cover.

What next in the grydscaen series?

This has been a question many people have asked Natsuya to date. So far even I have not been able to get that out of him. Natsuya insists that each volume has a purpose and that the initial grydscaen arc has a solid ending that is coming within the year. Natsuya also says there are more backstory books coming and a new trilogy that you are sure to love. He has a lot in store for grydscaen and I know that you are eager to see where the story leads. For now Natsuya teases me about the final volume of the original grydscaen story arc. He says it is written and that you will love the ending. I can’t wait to see where the story goes from here. Hopefully you will look forward to the conclusion of grydscaen which Natsuya has promised will come this year soon. I can’t wait. Check back for more and enjoy the cover of grydscaen: union.